2nd Marine Division rings and gift shopping online. The 2nd Marine Division of the US military has grown steadily since it was organized and formed in 1941. There are several subdivisions that have been formed and continue to serve the nation. As a part of the US Marine Corps, this division plays a major role in combat missions.

The true spirit of the 2nd Marine Division has been passed on from one generation to the next in order to create a community that is strong, morally upright and courageous. In the current day, this combat branch plays a key duty in various missions. The division is capable of providing expeditionary service according to the given directives. It is a versatile group with extensive ground combat abilities both in land and naval operations.

The insignia used by the 2nd Marine Division is a beautiful symbol.  It was created in 1943 for the units that were serving at the time. The insignia was used on shoulder patches but that use was disallowed in 1947 by the Marine Corps. Now it is found on a variety of items including pertinent documents, signage, unofficial attire and various jewelry items such as military rings.

The background of the insignia is scarlet. In the central part is a golden torch inscribed with the number two and held by a hand. White stars that are scattered around the central torch symbol. They are set as a remembrance of the Southern Cross and Guadalcanal. It is a magnificent symbol that continues to be a bonding element for all the members of the 2nd Marine Division

Every member of the military deserves a special item that is meaningful and valuable. Whether the personnel is in the 2nd Marine Division or not, on active duty or not; each individual who has served the nation with dedication and courage will appreciate having a custom military ring.

These rings can be designed as one would like it. When personalizing a military ring, the insignia of the relevant branch is added such as that of the 2nd Marine division.

To make it more specific to an individual, the rank served is also inscribed along with the name. With a choice of durable material such as solid Gold and Premium silver, this item is very sturdy and ideal for delivery around the world.

A custom military ring is a great item to celebrate special occasions and mark promotions. This is a gift that will convey affection for the Marine personnel and still serve as a reminder of accomplishments they have made. 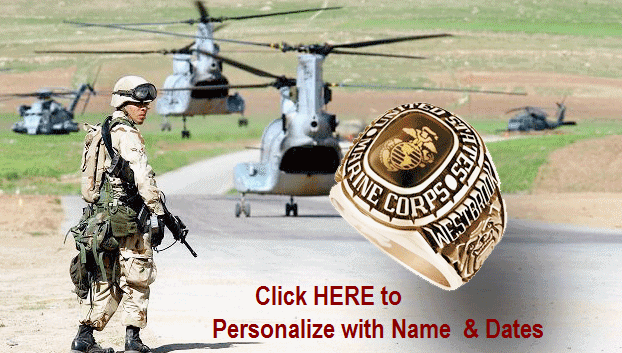 Remember all these rings are unique are made using the information entered in the shopping area. They are among the finest marine rings available anywhere in the world.