75th Ranger Regiment relates  a proud history  in the Armed Forces. Although there have been United States Rangers longer than there has been a United States Army, the 75th Infantry Regiment was organized during World War II as “Task Force Galahad” in the brutal China-Burma-India Theater, on October 3, 1943. Rangers saw action in 16 significant campaigns in the war, including Sicily, Anzio, Morocco and Leyte. It was during the D-Day landings in Normandy, 6 June 1944, that the Rangers earned their motto, “Rangers lead the way.”

Ranger battalions were deactivated at the close of the war. During the Korean War the Rangers were attached to various regiments. In the Vietnam War the 75th was resurrected on January 1, 1969, and contributed 15 Ranger companies, thirteen of which saw action in Vietnam. In 1972 the units were again inactivated. But on July 1, 1974 the Army formed the 1st Battalion (Ranger), 75th Infantry, at Fort Stewart, Georgia, followed by a 2nd Battalion and 3rd Battalion in short order. In February 1986 the 75th Ranger Regiment was designated, at Fort Benning, Georgia.

The battalion saw action first in 1980. Elements of the 1st Battalion were involved in the attempted Iranian hostage rescue, and in October 1983 the 1st and 2nd Battalions led Operation Urgent Fury to rescue American citizens in Grenada’s True Blue Medical Campus and secure Point Salines Airfield, deploying in a bold, risky parachute assault. 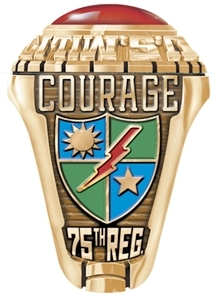 Since then the 75th Ranger Regiment served with distinction in Operation Just Cause in Panama in 1989, spearheaded by a Rangers parachute assault 75th Ranger Regiment elements served in Saudi Arabia with Operation Desert Storm in 1991, and in Somalia in 1993. Launching a daring raid under broad daylight on October 3, inflicting 600 casualties in an 18-hour fight considered the most vicious ground combat warfare since Vietnam.

The 75th’s Regimental Reconnaissance Detachment Team 2 supported TF Falcon in Kosovo in 2000, and after 9/11, the 75th was called upon to lead ground forces in an airborne attack in Afghanistan as part of Objective Rhino to support Operation Enduring Freedom. The 75th’s 3rd Battalion conducted Operation Iraqi Freedom’s first airborne assault on 28 March 2003.

The War on Terror

As part of the Global War on Terrorism today, Ranger units serve with distinction in combat as part of Operation Iraqi Freedom and Operation Enduring Freedom, deploying in airborne assaults, infiltrations, urban raids and complex rescue operations. By the mid-2010s, the unit has earned six highly prestigious Presidential Unit Citations, as well as nine Valorous Unit Awards and other significant unit commendations.

The 75th Ranger Regiment stands ready today for any no-notice combat deployment anywhere in the world. Rangers maintain the finest proficiency, readiness and ability, conduct operations from squad to regiment size and are capable of such operations as destroying enemy facilities, securing airfields and killing their enemies with precision. Order beautiful Ranger Army Rings online today.