Army Creed for men and women who serve un the United States Army. The Army creed is a saying or oath which provides a structure by which all Army personnel should to work or live by. The army creed sets the way of, life in the service. It reflects a set of values by which all army personnel should adhere to. Loyalty, Selfless service, Duty, respect, courage, honor and integrity are some of the values that the creed encourages.

These values define who Army personnel are and what they aspire to become as both individuals and as a team. All Army personnel are taught the creed during training. They are expected recite it in public ceremonies throughout their career at the end of their training.

Knowledge of both the Non-commissioned officer’s creed and the Soldier’s creed is a requirement. For Army personnel to be considered by the Soldier of the month boards as well as at enlisted promotion boards it’s a must. Unlike the uniformed services oath of enlistment or oath of office, the Army creed can be affirmed by both soldiers and the army.

History of the Army Creed

The current Army Creed is a by product of the- ‘Warrior Ethos’ program. This program was authorized by Erick k Shinseki in May 2003 who was the then Chief of Staff. It was written by members of the Warrior Ethos team task force and approved by Peter Schoomaker.  He was the preceding Chief of Staff on 13th of November 2003Introduction of the creed triggered a campaign known as “Task Force Soldier.”

This was a leadership and integrity commitment to all army personnel ensuring they embody the soldier’s creed and are always ready for combat with the enemy. The Army creed was published first in the infantry magazine on 22nd Dec 2003.All soldiers are expected to stand at attention whenever they recite the Army creed and shout “hooah” at the end of the creed though it is not included in the original version of the creed. Wear the army rings with the pride of the creed.

Here is the Soldiers Creed:

I am an American Soldier.
I’m a Warrior and a member of a team.
I serve the people of the United States, and live the Army Values.
I will always place the mission first.
I will never accept defeat.
I will never quit.
I will never leave a fallen comrade.
I’m disciplined, physically and mentally tough, trained and proficient in my warrior tasks and battle drills.
I always maintain my arms, my equipment and myself.
I am an expert and I am a professional.
I stand ready to deploy, engage, and destroy, the enemies of the United States of America in close combat.
I am a guardian of freedom and the American way of life. 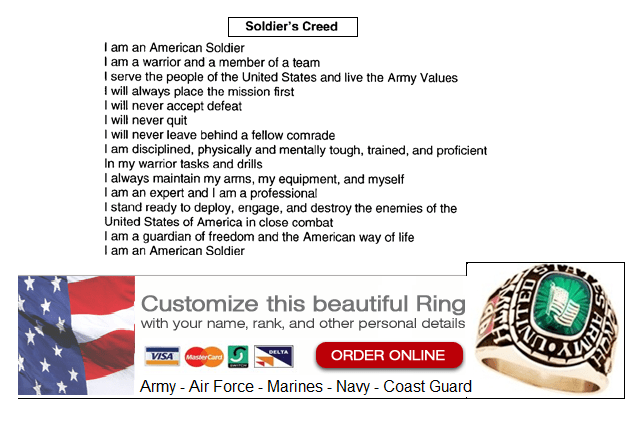