Military Class Rings designed for all branches of the Armed Forces. Custom Military Class Rings fully personalized. FREE Shipping on selected rings. While looking for a military ring, there are a lot of different options to choose from. Unlike other regular rings, bracelets or necklaces, a military ring should not be bought from any average jeweler. Most of the jewelry stores don’t customize military class rings. As a result, the jeweler will try to sell you something from the stock, which may be completely useless for you. Usually, you would want a military ring to display a tour of duty, deployment or an important unit crest. In this article, we will tell you how to make sure you get the best military ring as per your requirements.

Where To Buy  Military Class  Rings

It is always better to look online for military rings. You can also use a military shop if you are on a military installation. While looking online, you get to see a wide range of military rings belonging to the US Navy, the US Military, the US Air Force and the US Marines. Most of the websites on the internet give you a chance to design your own rings. They have a ring designer program that makes it easier for you to customize a ring according to your requirements.

How To Design Military Rings
It is very easy to design military class rings on your own. However, you need to consider some important things. First of all, you need to determine the type of metal you want to use. You should also choose the stone color and wordings which you want to be imprinted around the stone. It is also important to select side emblems. Emblems should be appropriately chosen to reflect your field of duty and service. At a website, it becomes very easy to use the step-by-step guide and design a customized military ring. The cost of designing is also very affordable.

Who can Choose to Design Class Rings

Almost every website has designs for both men and women, who have been associated with defense services. Deployment rings to commemorate big deployments like ‘Operation Enduring Freedom’ or ‘Operation Iraqi Freedom’ have always been popular. Once you design a military ring and order it, you and your family will be able to treasure it for years to come.

How many Designs are Available in Rings
There are hundreds of designs you can choose from. Moreover, these hundreds of designs can be used to make thousands of combinations to customize your military ring. You can work on both sides of the ring. Therefore, possibilities are endless. There will be two emblems on both sides of the ring. All quality military class rings have the name of the wearer on one side and dates of duty on the other. 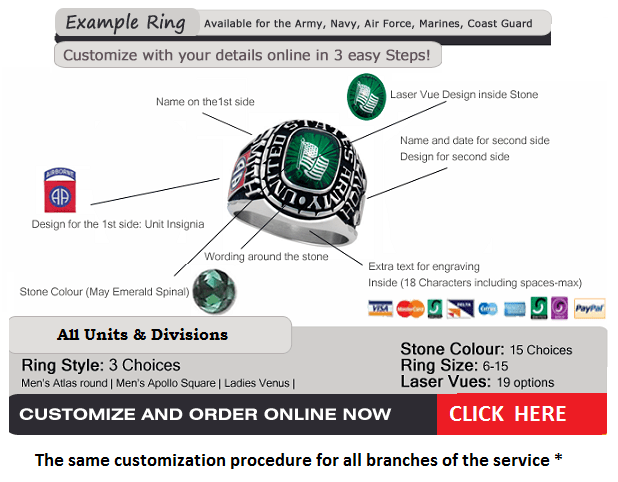 The inside of the ring may include a personalized message like an army motto, name of a fallen colleague and so on. It is always better to buy military rings online. You get a lot of options to choose from and the prices are affordable. Military Class Rings can be personalized internally and externally. The wording around the stone will indicate which branch of the service you your are serving in, or indeed the branch you have retired from. The “United States Military” is probably one of the most powerful military  in the western world today.

With its well trained troops and modern technology it is extremely capable of fighting any war or conflict from a distance, unlike earlier years where wars and battles were fought up close and were very gruesome, not that a present conflict is any less gruesome today. The role of the military has not changed a lot over the years and in the main its principle role is the defence of its national interest and policies. The US Military is of course engaged in the defence of poorer nations around the world like the situation in  Djibouti and the middle east and military class rings can record these details.

In Kuwait in the 1990’s when Saddam Hussein the Iraqi leader decided to attack its neighbour in the south, the US Military came to their rescue, and after five days had driven the Iraqi forces out of this small country. After the cowardly attack on the twin towers in New York, the role of the US Military changed again. This time it took on the role of protecting the civilised world from terrorism and is engaged today in hunting for some of the world’s worst and feared terrorist in places in Afghanistan and Iraq.

The US Army is made up of units, divisions and brigades and is based in the United States, Germany, Korea, Iraq, Kuwait, Afghanistan and some more obscure and secret locations around the world. In all of these locations you will find full military installations with active units ready to deploy at very short noticeNo other national army has the amount of installations outside of their own countries. You can select  military class rings for all units and divisions. The installations are self sufficient offering, military lodging, retail and dining, recreation and family support organisations.

Major activities are organized on these installations periodically to enhance living conditions and give the feeling of normality to deployed families and soldiers. We have that can be custom made with your name, rank, unit or division emblems to celebrate and commemorate your life in the United States Military. The military class rings are available in Silver and Gold and are purchased by both men and women for all special occasions and milestones.

Rings for The Navy

The US Navy is mainly made up of the sixth and ninth fleet and spends an enormous amount of time patrolling the seas of the world. Since the 1990’s the Navy has been engaged in patrolling the waters around the Middle East carrying troops on their massive ships from the US mainland to Kuwait and Afghanistan. Their deployments can last from six months to longer depending on the situation. Custom Navy Rings in Gold are one of the finest traditional ways of displaying complete pride in your chosen career. With the options of the various side images and the ability to engrave your name and rank on the rings you shouldn’t find it difficult to create a suitable ring.

The US Air Force is mainly required to assist in fighting wars from the air and would be regarded as the elitist part of the defense forces. The Air Force consists of fighter planes, helicopters, transport planes and personnel that are incredible trained to fly and control the high-tech pieces of aircraft that we see flying in deployment areas and at home bases. Germany Landsthul Air Base, comprises of the 320th General Hospital and has been their since 1951, just after the second world war.

Wilson Barracks that so many know of was named after Corporal Alfred Wilson, who was a medic and sadly died in battle during world war two. On the ground these pilots are supported by mechanics, flight engineers and office and administration staff. Whatever your position in the United States Air Force we have a ring emblem to suit you. Design Air Force Rings in Gold   to reflect your rank or unit and engrave it with your name and dates. These are very special types of military class rings.

The US Marines works closely with the US Navy and has served in every major conflict around the world; it consists of around 250,000 members including reserves. It is the smallest of the United States Armed Forces and its roots can be traced back to Philadelphia where it was formed at “Tun Tavern” in 1775, this date is regarded as the birthday of the Marine Corps. Two of the biggest training bases are Camp Lejune and Camp Pendleton and whenever you speak to a marine, he will always refer to his tough and disciplined training in one of these bases.