United States Navy installations are at various locations here at home and around the world. In Norfolk, Virginia  the United States Navy has one of it’s largest bases located at Hampton Roads, and sits on approximately 35,000 acres.

The training Support Center is at Hampton Roads along with service center that looks after the servicing of navy ships and carriers. For many who live in the area its no uncommon to see some of the greatest ships in the world head off on deployment to the Middle East and beyond. Normally these voyages are underway for 6 months or more.

In South Carolina there is the Nuclear A-School located in Charleston and of course there are many in Florida.  Jacksonville, Pensacola and Panama City Beach are home to training centers and diving schools. The aviation training base for Flight Officers and Aircrewmen is located in Pensacola.

At Great Lakes in Illinois this is where enlisted sailors get their training at boot camp. Every weekend at Great Lakes you will see hundreds of young men and women graduate to the United States Navy and indeed celebrate. Many will receive their Navy Graduation Rings as gifts from parents or loved ones.

Out in California in San Diego is the homestead of the Pacific Fleet. Coronado is where many want to be stationed as its setting is idyllic in every sense of the word, beautiful beaches and clement weather all year round. If there was one complaint it would be that its very sedate, and more suitable for mature folk. At Pearl harbor where the Japanese invaded during the second world war the Pacific Fleet is headquartered. Pearl Harbor is on the beautiful Island of Hawaii.

The United States Navy has bases on the Islands of Puerto Rico and Guam. In Yokosuka, Japan the forward-deployed fleet is based and this is the largest base outside of continental USA. The Middle East has naval bases populated by Navy Personnel in Kuwait, and Bahrain. In Europe the United States Navy is located in Spain and Naples. Many sailors when underway will decide to commemorate their trips with custom made Gold Navy Rings and other mementos. 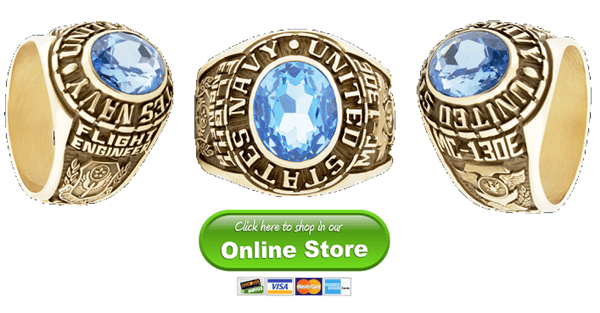