Information about the US Army Infantry and how the modern soldier trains to accomplish the skills of the foot soldier. The term infantry originates from the Latin word “infantem”.  This word is used to describe a group of soldiers on foot rather than horseback. Soldiers were specifically trained for the role of fighting on foot and came in three main categories.  These are light infantry, medium and heavy infantry. In some cases Military Rings would indicate which infantry brigade they belonged to.

Origins of the US Army Infantry

The US Infantry is the oldest branch of the Military. It goes back to 1775 when ten companies of riflemen were authorized by the Continental Congress.  The Infantry insignia is comprised of two gold color crossed muskets and is very distinctive.

The US Army Infantryman is a highly trained specialist. 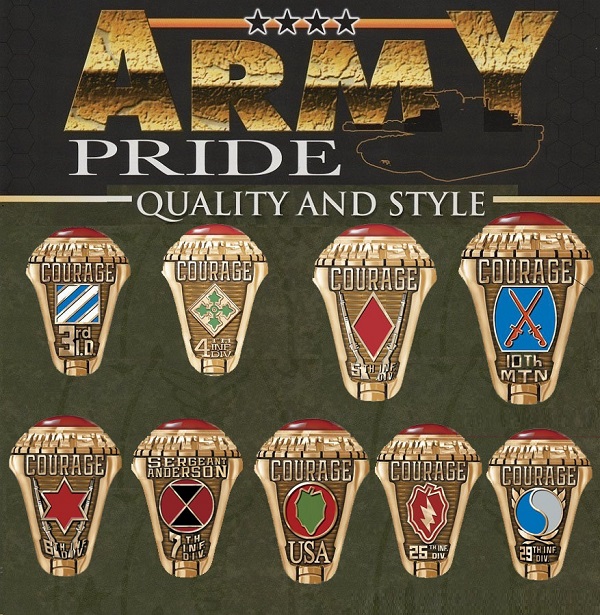 Today the infantryman has evolved into a highly trained specialist. He has a high level of personal discipline and overall combat effectiveness. The equipment the infantryman carries has also evolved along with technology and tactics in general. This equipment includes the latest in firearm technology, protective armor, survival gear, and specialist mission specific equipment.

Military Rings for all the main US Infantry Divisions
Our company specializes in custom Military rings for all branches of the US Military. These include rings for the US Infantry and other divisions. Rings can be customized to include side emblems of all the major US Army formations.

Popular rings include the Infantry corps itself as well as individual insignia that can be added as a side emblem on the ring to represent all the major infantry units and current divisions.

Military Rings Customization Options
Our Military Rings you have a wide range of customization options. The stone can be selected to represent the month of birth. The metal can be selected to suit your budget and preference. All rings can be personalized on the sides by choosing a branch emblem. Inside the band there is room for additional engraving.