Air Force Rings custom made to represent the traditions and commitment of serving in the United States Air Force. for active and retired men and women. The rings commemorate achievements, milestones and retirements of active and retired men and women. The emblems representing the wings, groups and squadrons can be cast on the sides of the rings and personalized with text. Air Force Wings are commanded by a Colonel and consists of several squadrons.

The Air Force is made up of 120 Wings. The three major ones are the Air Base Wing, the Operational Wing and the Special Mission Wing. Air Force Groups are made up of many squadrons and also under the command of a Colonel. The two major groups are the Dependent Group and the Independent. There are approximately 17 Independent Groups and nine of those are flying.

Air Force Squadrons are made up of several flights and would be considered the basic unit in the United States Air Force. Usually a squadron is under the command of a Lieutenant Colonel or a Captain. So if your serve in any particular unit we have Air Force Rings to represent your service.

The most popular rings is the military air force class ring. The ring has a stone set in the top and the Air Force logo can be lasered into the stone. There are approximately eight locations on a ring that can be personalized. On the sides of the ring text can be engraved and emblems like the American Flag or the Air Combat Command can be proudly displayed.

USAF Rings in Gold and Silver

There are three metals that are used in the creation of Air Force Rings. These are Silver, Gold and a jeweler’s metal referred to as Celestrium. The silver used is premium silver and will be stamped to show this. The gold can be yellow or white gold and will also be stamped. Celestrium is extremely durable something like titanium, it will not damage easily. 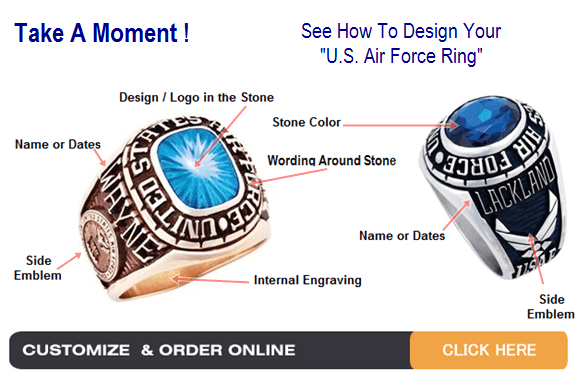 When it comes to celebrate an airman’s retirement or promotion the preference is the Gold  Rings. As gold rings are expensive, colleagues often club together to purchase one of these rings. The Gold options available are 10K White Gold and 10K Yellow Gold. 14K Gold is also an option for those who want to created an Air Force heirloom. The best rings are the ones with a solid back. Because of the quantity of metal used in the creation of the ring, it will last a lifetime. That is one of the reasons the company gives a lifetime warranty. For the very expensive rings we suggest that you have them covered under your insurance in case they are lost or stolen.

Rings vary in price, but whatever your budget is, you will find something suitable when you shop at Military Online Shopping. The price ranges from as low as $200 right up to $1800.00. The rings are exceptional and are a solid construction underneath the stone

Rings Honoring Men And Women
These unique custom made rings will honor the men and women who serve with honor and distinction. They will be become a constant reminder of the commitment and friendships, made in the world’s most skilled Air Force.

Air Force Rings show your dedication to the nation and the service. The Air Force – men and women who soar above us all. They protect us by protecting our skies, in peace and during times of war. We cannot pay them back for all they do, but we can show our thanks in a tangible way – we can give an Air Force ring to a loved one or spouse.

Originally a part of the Army (when it was known as the Army Air Force), the Air Force split off from the Army soon after the end of World War 2 and is now a separate branch of the armed forces, primarily responsible for aerial warfare and defence. Whether they fly fighter jets, transport planes or bombers, whether they serve in logistics units or maintain aircraft, whether they serve during peace or during war, we honour past and present members of the Air Force for their dedication.What better way to show their pride, what better way to tangibly honour their history and the sacrifices they make, than an Air Force ring that is a visual symbol of their skill, their strength of character and their commitment?

Gold Air Force rings can be designed to reflect a person’s service in the Air Force. They can also be designed to show that a person served during a particular war or series of battles: Korean War rings, Vietnam war rings and Operation Desert Storm Air Force rings are examples. Still other types of Air Force rings incorporate the design of a specific Air Force combat medal or badge, or a specific rank insignia, into their design. There are three basic styles of Air Force rings. The first is a somewhat ornate design that is very similar to a school ring or class ring. It usually has a semi-precious gem, crystal or colored stone set in the center. This type of Air Force ring also has several different designs engraved or etched partway down the sides of the band on each side of the central stone.

The second type of Air Force ring is a more streamlined, elegant ring with flowing, “clean” lines. This design sometimes consists solely of engraved or etched precious metal at the top of the ring, but it is sometimes set with a central semi-precious gem, crystal or other stone. The sides of the band of this type of ring are usually not decorated, and the ring has a strong, masculine appearance.

The third type of Air Force ring is similar to a signet ring or seal ring and utilizes Air Force military coats of arms or insignia as the “seal” at the top of the ring. There is no center stone with this design. All Air Force rings, however they are designed, can be decorated with beautifully engraved and highly symbolic heraldic crests, shields, coats-of-arms or insignia that are used in the Air Force.

Air Force rings are usually made of precious metals such as gold, silver or platinum, and high-quality pieces have intricate detail. If the crest or coat of arms has been colored by being enamelled, or if the center of the ring is inset with colored gemstones, Air Force Rings have especially strong visual appeal. The initials or name of the person who will wear an Air Force ring can usually be engraved or etched on the band. A personalized Air Force is a uniquely appropriate way to reflect a person’s service, either past or present. “Above All.” The motto of the Air Force and its proud and faithful members who fly above us every day. Members of the Air Force deserve a uniquely appropriate way to show us their pride in their skill, their history, and their dedication. An Air Force ring.