What You Need to Know About Army Veteran Rings. For many Americans, enlisting in the US army is an act of patriotism. It also comes with many dangers and sacrifices. Apart from gruelling training, there is the deployment abroad. Sometimes it is to maintain peace in a conflict-ridden region. Other times it is to participate in active military operations. For instance, since the Second World War, American soldiers have fought in almost all the continents to defend their freedom and that of their allies. Some of the places they have fought include Korea, Vietnam, Kuwait, and the Balkans.

Currently, they are engaged in Iraq and Afghanistan. These campaigns help to keep Americans safe at home while maintaining peace and security in other parts of the world. Deployment to some foreign country is, therefore, something that every American military personnel has come to expect. The deployment can take somewhere from six to fifteen months. Regardless of the duration or nature of operation, deployment often involves immense sacrifices. There is the long separation from close family members and friends. Then there are the deprivations. If the deployment is an active military operation, it is not uncommon to go without sleep or spend nights in the cold. There is also the constant risk to life from enemy fire. Some make the ultimate sacrifice. Others come back disabled from injuries sustained during the campaigns. 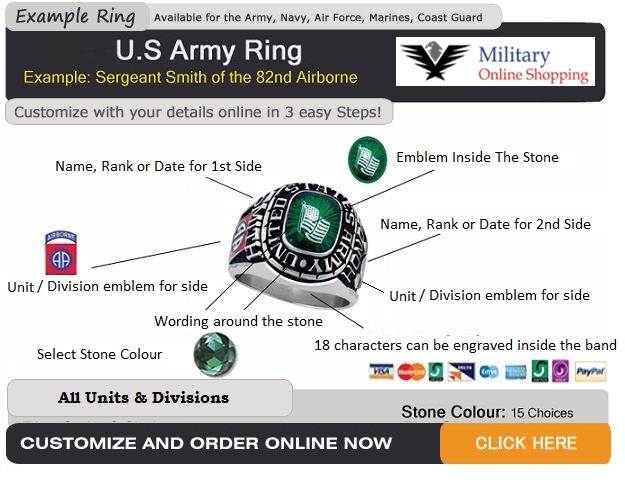 Badge Of Honor For Veterans

The great sacrifices that military personnel make and the knowledge that the sacrifices are for the greater good of Americans makes many veterans extremely proud of their service. To have served in the American military is a badge of honor that they carry throughout their lives. Some show this pride by wearing, whenever possible, their military uniforms. Increasingly, however, many are choosing to wear army veteran rings. They show pride in their military service and commitment to their country, military branch or unit without appearing ostentatious. Their subtlety also means that they can be won at almost any time and occasion. What makes them particularly is the fact that they can be customized. You can choose to have the inner bands of your ring engraved with not just your initials but also rank during your service and the dates that you served in the army. You can also include your unit or military branch.

If you are an honor recipient, you may choose to include the award, such as Purple Heart, on the ring. Thus, the ring provides a basic summary of your military career. Additionally, there are currently multiple designs of army veteran rings. Many are designed to meet different fashion tastes. Thus, as a veteran, you can also wear your military ring as a fashion item.

The convenience of military rings and their unique ability to summarize one’s career makes them great gift items to army veterans. Spouses, girlfriends and boyfriends of army veterans can buy their loved ones deployment rings not just as a show of love but also a way of appreciating their sacrifices. Veterans themselves too can buy them to honor their careers, show commitment to their branch or unit and also show solidarity to colleagues that they served with.