Coast Guard Rings are a badge of honor and commitment to a rewarding career. The coast guard is basically a maritime security organization of a country. This term implies different responsibilities in various different countries. From being a heavily armed military force with customs and security duties, to a volunteer organization. The typical coast guard functions are quite distinct from the typical functions of the navy and the transportation police.

A coast guard might be a part of a country’s military or law enforcement agency. The Coast Guard is a military branch which has a law enforcement capacity. This means they can arrest and prosecute offenders. They are a well respected branch of the military.

In the United Kingdom, her Majesty’s Forces is basically a civilian organization, whose main role is search and rescue. Coast guards usually operate ships and aircraft.  They operate seaplanes and helicopters also. These are either leased or owned by an agency so as to fulfill their own respective roles. 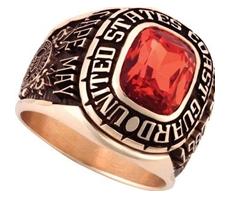 The Irish Coast guards have a very limited law enforcement role. They normally enforce the maritime safety laws, such as inspecting ships that are docked in their jurisdiction.
In cases where a Coast guard is mainly concerned with the coordinating instead of executing the rescue operations, life boats are usually provided by the civilian voluntary organizations. The branch is trained for security and caring for the people. Remember the valuable contribution  during Hurricane Katrina and other disasters that the USCG provided.

Click On Any Image Below To Enlarge & View Better